Going paleo can be one of the best things you can do for your body, which is why I came up with this list of 5 reasons to go paleo. Despite suffering from both Hashimoto’s and PCOS, I’ve fortunately been able to go paleo and drop some weight. Even though it took me 6 months, I managed to lose 10 kgs of fat with going paleo and running a 5k, 6 days a week. The key is discipline. Nothing else. No easy way. Just discipline. I know many of you might roll your eyes at this because of the negative connotations associated with the word ‘discipline’, but to create a routine, we need it. As most trainers will tell you, losing weight is 80% diet and 20% exercise. Going paleo may just give you the results you want! I consulted with Holly, Founder of Smith St. Paleo in Dubai to find out why this particular diet may just move you to eating healthier food and living your best life.

What is a paleo diet?

‘Paleo’ stems from the term ‘paleolithic’ and refers to eating ‘whole foods’ – including meat, fish, vegetables, fruit, nuts and seeds. It’s also termed a ‘caveman’ diet. It’s a grain, soy, gluten, dairy and legume free diet. Going paleo would be a great option for those who have gut issues or those that feel bloated and struggle losing weight. It’s a good way to transition into try an anti-inflammatory diet such as AIP.

It’s true folks, take out gluten and dairy and you will genuinely feel less bloated and eons lighter. If you’re a person who suffers from an autoimmune disease, it’s really important for you to recognise the fact that the more gluten and dairy you eat, the more your body becomes inflamed and the more you suffer with an inflamed gut. Remember, the gut is the chief of all problems. A lot of times we don’t realised what’s going wrong with our body or why we’ve plateaued with our weight loss goals. The secret to most illnesses lies in your gut. By going paleo, you’re going to notice less to no digestive issues. “Natural food is easier to digest so you will avoid any digestions issues.” says Holly. To increase your gut health, up-take the usage of probiotics such as kombucha, sauerkraut and coconut yoghurt.

A paleo diet completely eliminates artificial forms of sugar and sugar itself. Though eating fruit is encouraged, if you intend on losing weight then you need to watch your overall sugar intake. Go for lower glycemic fruits such as berries, bananas and mango. Trust me, sugar addiction is the hardest thing to get rid of. I recommend you to try to go two weeks (the exact same time it takes you to create or kick off a habit) and just eliminate sugar completely as you transition to a paleo diet. This will help you estimate how dependent you are on sugar. It may affect you adversely; you might have mood swings and low energy levels at the beginning but they will gradually disappear. At the end, you’ll realise that the intake of sugar is directly linked to your emotional fluctuations and create a ‘reward system’ that is detrimental to your health (Adam and Epel, 2007).

Of course, let’s not forget about physical health. Osterdahl et al. (2008) conducted a 3-week experiment where he made 14 healthy subjects go on a paleolithic diet for 3 weeks. They found significant improvements in weight, body mass index, waist circumference, and systolic blood pressure.

Because whole foods are just about available everywhere, it’s probably the easiest diet to stick to. “Paleo eating is the way our ancestors ate for years, which shows it is sustainable – so you will not yo yo in any of the great benefits but enjoy them forever” says Holly. It doesn’t matter where you’re travelling, your options are actually quite limitless if you are paleo. It’s not as restrictive as a vegetarian or a vegan diet, but is actually quite simple in comparison.

4. You’ll be amazed at your options

Before you start grumbling about the lack of bread or rice in your life, think about what you can have on paleo rather than what you can’t. Of course, grass-fed is always better, but if you’re unable to afford grass-fed, organic and hormone free, opt for lean protein like fish, which will have much less chemicals than your standard chicken or beef meats. Cauli rice is a great way to get your veggies in. Season it with some coconut chicken curry and you’ll have a delicious meal full of fuel.

5. You will perform better

Paleo at the end of the day, is not a complex diet. “You will be eating food that is essentially the best fuel that you can put into your body” says Holly.  “It’s all about fueling your body to run through your life. “Paleo food is 100% natural and in no way modified – containing none of the chemicals commonplace in foods today. It is such chemicals that can promote diseases such as diabetes.”

Don’t know how to go paleo and find it overwhelming? Smith St. Paleo have just launched their paleo meal plans to help you transition into eating healthier for life! Hope you enjoyed my 5 reasons to go paleo. Do you have any doubts or questions about the diet? Let me know in the comments below.

PIN THIS BY CLICKING THE IMAGE BELOW 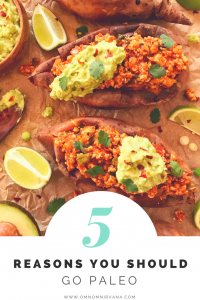